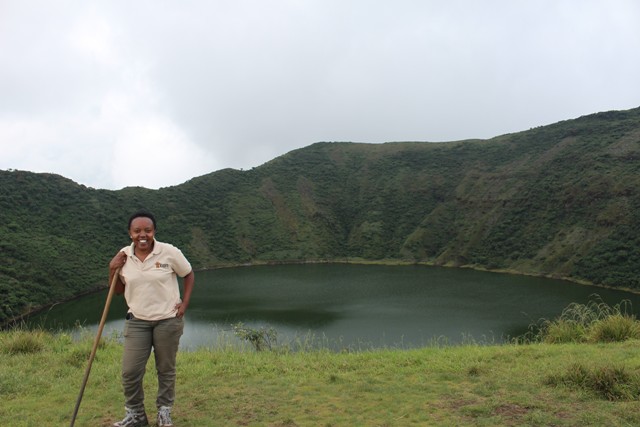 I like hiking but I am certainly not that good at it. I get tired quite fast owing to the fact that in my everyday life I do not exercise except for occasional walks as I go about my day. However I like adventure and doing activities that out of my ordinary life like hiking. I imagine the satisfaction from great views when I arrive at the top of a hill or mountain therefore I encourage myself to keep on. It is because of this back ground that I decided to hike Mt Bisoke one of the Virunga volcanoes shared between Rwanda and DR Congo.

I previously had the idea of hiking Mt Bisoke but had no concrete plan until the day before I took the hike. I had taken clients to trek gorillas in Volcanoes national park in Rwanda and I needed to wait for them to finish the trekking later that afternoon/evening and transfer them back to the hotel. Then I got the idea, instead of sitting around why not use to the time to hike the Bisoke volcano. With a plan, I prepared for Mt Bisoke the next day as the rest of the group spent time trekking mountain gorillas. We received briefing early morning at the park headquarters before we could drive to the starting point of the trek. The drive to the starting point is about 1 hour on a bumpy road filled with stones. It is the kind of road you prefer to walk on but not drive on, nevertheless we arrived at base where the cars park and we started the trek. We were a group of 4 ladies with no gentleman except for the porters, ranger guides and army men. We were advised to walk at our pace because the hike can be difficult and no one should lose breath trying to keep up with other peoples pace.

I am a slow walker weather on flat land or otherwise. I knew for sure the hike would mean that I would even be much slower and therefore I did not expect to hike at the pace of anyone else. The hike was gruesome in every sense, at some point I could not feel my legs but I told myself that whatever happens I would reach the top and enjoy the views of the lake. The group was later divided into 2 groups i.e. the one ahead and me who remained behind with a very kind ranger guide. I did not appreciate one of the ranger guides who attempted to pressure me into walking faster. At some point he radio called the ranger I was with asking us to stop and not proceed so they find us there on there way down but this ‘ranger guide’ persisted with me. I was grateful to him for keeping with me encouraging me to not give up, in typical African style he continuously told me that we were left with a few minutes to reach when clearly it was several minutes.

After 3,5 hours I arrived at the summit, I was told the rest arrived after 2,5 hours and others at 3 hours. I was really happy to make it even though my legs were not that pleased with me. The way down proved to be even more painful but at least it was faster. The previous days rain made the way very slippery which was worse off on the way down. After about 1 hour we arrived where the cars were parked ready for the drive back to Musanze which was about 2 hours because of the road. The pain in my legs lasted for about 4 days, I promised myself to exercise more to avoid such but alas apart from occasional walks this has not happened and yet I look forward to hiking Mt Gahinga and Nyiragongo volcano in the near future.